The second return game of the year for the Mavericks.  This time they get to go to Ypil…Ypilis…shoot, who cares.  It’s in the eastern part of Michigan.  Probably. 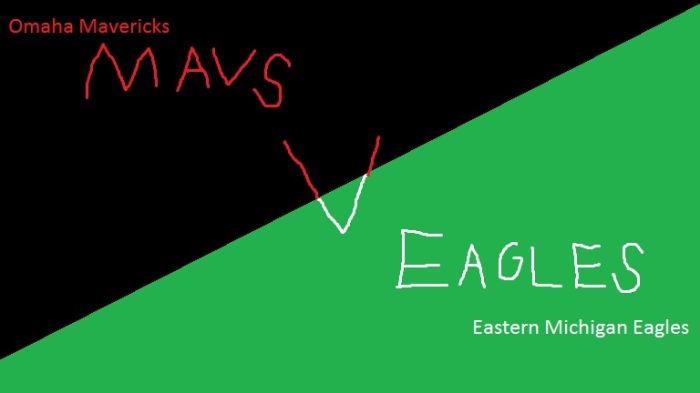 You may remember the game last year as one of the games that Omaha was down by large margin and did not end up coming back for a win.  The Mavericks were able to cut a 15 point lead down to six before losing 80-73 at Baxter Arena in what was just another Baxter Arena shooting blunder.  You may have sat there in Baxter Arena wondering how this high octane offense could survive if they shot around 20% on threes.  Survive may be too strong of a word.  It’s not like we’re dealing with a zombiepocalyse here.  This was also the game that I figured out that I love the french fries at the Baxter Arena.  Maybe my favorite in town.  If there was a reward program for racking up points on french fry purchases at Baxter Arena, I might literally own Aksarben Village in a decade.

That game was early in the year, and you could guess that is one of the games that the Mavericks wish they could have back.  Tra-Deon Hollins was still trying to figure out how to shoot and be conditioned at the division one level.  The Mavericks had not inserted Kyler Erickson into the starting lineup at that point or were using him as the team’s source of energy.  It still seemed as if after one season that Derrin Hansen had not completely figured out how to utilize Randy Reed and Tim Smallwood at this point.

Hansen and the Mavericks still may have some issues trying to figure out some of their guys in this game.  Figuring out where and when to play Daniel Meyer, Mitchell Hahn, and Zach Pirog looks like it could be difficult at the beginning of the season.  Each has a different skill set, and finding that right mix in the post for the right opponent could be a challenge for this coaching staff.  Figuring this out will be important for the Mavericks in this game as Eastern Michigan has 6’10” sophomore Jason Thompson IV who averaged 15 points and 11 rebounds as a freshman.  He may have been one of the best post players that Mavericks played all season long.

The Eagles are likely to not have issues like this.  Eastern Michigan is bringing back four starters, and return 80% of their scoring to their team that finished 18-15 overall and 112th in RPI.  The biggest loss to the Eagles is the graduation of 6’8″ forward Brandon Nazione who averaged 9.6 points and 6.5 rebounds.  The other players they lost were mostly players with small roles.  Nazione had 12 points and 7 rebounds against Omaha last season.  The Eagles will get to replace Nazione with Nick Madray, a 6’9″ transfer from Binghamton, who averaged 10.8 points per game as a freshman before ending his freshman and sophomore seasons with injuries.

The main issues the Eagles may have is their depth.  They really only have 6 players that are in their main rotation, which could be a problem for a fast paced team like the Mavericks.  They have three players that transferred in but will be sitting out the 2016-2017 season, and while that is good for the future of the program, that hurts your depth right now.

The Eagles were able to win in Baxter Arena with a lack of depth against the Mavericks on the Mavericks shooting 37% from the field and 4-of-17 on threes.  With Mitch Hahn, JT Gibson, and Marcus Tyus in the lineup, the Mavericks do not plan on going 4-of-17 in many games this season from behind the arch.  Let’s just hope they can shoot so well that the Mavericks wont have to worry about rebounding…

This game will be played at noon on the Saturday after Thanksgiving.  On ESPN3, so get prepared for your spouse to yell at you about hanging up Christmas decorations “because this is the best day to do it.”

I will accept a partial amount of blame for the loss of this Eastern Michigan game.  You see, and please do not attempt to find me and punch me in the face, but I took a Creighton season ticket holder to the game with me.  Yes, I took Dick C. Fan with me.  DCF is a UNO graduate.  He is a MavJaySker, though Husker football is the only Nebraska sport that he roots for, but he is cool with UNO sports.  DCF is more of a Creighton fan though, and because of his Creighton roots, he used to despise Jake White due to his Wichita State days.  The funny thing is, DCF actually looks a little bit like Jake White.  Remember, part of the plan is to get the MavJaySkers to get to UNO games and respect the players, coaches, and where the program has come.  I may have given DCF a little too much flack in the past.  He did follow UNO athletics in their division 2 days, but thought them moving to division 1 was a bit of a joke at first, but he appears to be comfortable with it now.

When Jake White announced that he was going to transfer to UNO, I immediately texted DCF and told him that his distant relative was going to be a Maverick.  DCF was not happy.  I think he cussed me out over a text message, and begged me to stop calling Jake White his cousin.  Over parts of last season, I would text DCF to update him on how good Jake White was playing as a Mav, and he never responded to any of the texts.

The day the Mavericks played UMKC, DCF texted me to see if I wanted to go to the Creighton game with him.  I told him no, but he could go to Eastern Michigan-UNO with me, so we struck up a deal that we go to the games together.  Tuesday afternoon, I asked him if he was excited to see his cousin play basketball.  He was the opposite of pumped.

When we got to the game, I really thought DCF was going to just start yelling expletives in Jake White’s direction.  Instead, the UNO fan in him came out, and he said “there is my boy.”  DCF even threw out a first pump when Jake White’s name was announced in the starting lineup.  Then, the game happened…

I do not hate Creighton athletics, but I do get annoyed with their fans.  I would say it is safe to call me a MavJaySker…in fact I think that is my gamer tag on Xbox.  I would just much rather watch their games on television or listen to them on the radio than to actually attend a game.  Hanging with 18,000 people freak out at every single whistle, good or bad, is not my thing.  Let me make a correction there, I would be with about 14,000 people freak out at ref calls as at any given time the CenturyLink Center has a combined 4,000 fans walking the arena looking for the cheapest beer that they can find, or they are permanently planted in the beer garden to brag up about how they went to the most expensive bar in all of Nebraska.  You can also always find a handful of people reading a magazine at any given moment.

It’s also stressful to hear some drunk guy try to convince his friend that the ranking of best basketball programs goes as this:  1. Duke/North Carolina/Kentucky/Kansas…2. Creighton…350. UNO…351. Nebraska…And Creighton was a three point shot away from Booker Woodfox from beating Kentucky in the National Championship in 2009?  2010?  Ah hell, that one year the NIT second round was just as good as the NCAA Tournament.

I also love that when you go to a Creighton game and the fan’s pregame analysis is just that the other team sucks.  For three straight hours Wednesday night, I just heard how Arizona State was a shitty basketball team…then the Jays lost to them.  So I guess that means the Jays are back.

Some takeaways from the Creighton game…

I’ve gone to two basketball games in two nights, and the home teams have lost in each one.  I wanted to go to the Lady Mavs game tonight, but I am afraid I’ll drop three in a row and be the bad luck guy.

The Eagles have size, but they are not incredibly talented in the post.  Seriously, how does a 6’8″ man shoot 27 % from the field?

That name is made up, right?  He was a 3rd Team All MAC as a sophomore showing he is a serious scoring threat averaging 16.7 ppg and shooting 44% from the field.  It is scary to think about who the Mavs will have guard him.  He made 70 three point field goals as a sophomore.  Lee is a guard that could really prepare the Mavericks for the Summit League.

Transferred to Eastern Michigan from DePaul after his freshman season.  At 6’8″ he likes to play on the outside with 75% of his shot attempts being from outside for three.  Averaged 4.3 points per game, but only shot 27% on the year.  He constantly has a look on his face that makes you feel like he is bored.  Actually if you look up any picture of any player on their team, they look like they just woke up from a nap.

I say I am afraid of Raven Lee because of the Mavericks’ poor perimeter defense last season, but I am gaining more hope as I read about the additions of Tra-Deon Hollins and Alex Allbery.  Both claim to be defensive specialists, but I do not imagine Allbery getting much playing time.  You can be comfortable with your walk on wanting to be a defensive specialist.  In most scenarios, your walk on is going to be your 5th option on the court, so it can be huge if he can make some defensive stops while he is on the court.

While, the Mavericks were one of the highest scoring teams in college basketball in 2014-2015, they unofficially averaged the 19th most points in division one…the Eagles are a sound defensive team.  The Eagles were 11th in the nation in steals per game, and ranked 51st in blocks per game.  How much can the Mavericks score on a defensive team like this?

Hey, the Mavericks are 3-0 against the MAC since joining division one, but all three of those wins are over Northern Illinois.  But, hey, the Eagles had the same conference record as Northern Illinois last season.

I am not going to sit here and say this game is a guarantee for the Mavericks, but if Hollins is as good as a defender as advertised, don’t you like Mavericks’ chances to pick up a win at home against the Eagles?  I know there was not a lot here, but how excited can one man get in writing about Eastern Michigan basketball?  Earl Boykins played at Eastern Michigan, he was pretty fun to watch.