Three road games in the first four games of the college basketball season?  Have we gone mad?  So much basketball! 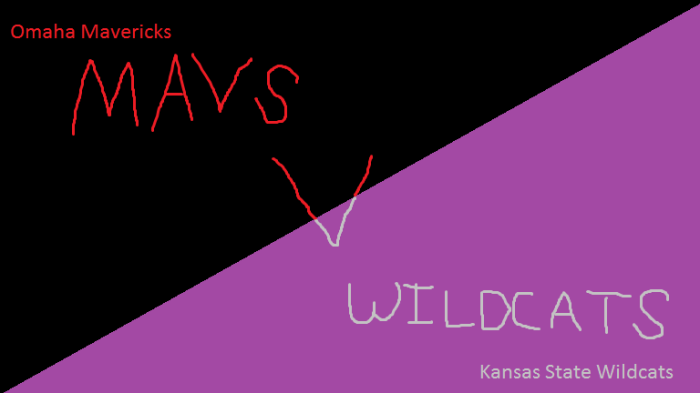 It is hard to gauge a team like Kansas State.  For one, you immediately try to pretend that Manhattan, Kansas is not a real place in this area that we call Earth, so you’re like “what a bunch of dorks.”  For two, Bruce Weber is just kind of an odd ball guy, so it can be hard to take his team truly serious…especially since Kansas State has gotten worse in the Big 12 in each season that he has been coaching the Wildcats.  Even after a successful career, it’s hard to take him all that serious.  Third, Kansas State’s style of play is not incredibly flashy, and they do not ever really aim to impress you on paper.

This is the second time that Mavericks will be taking on the Wildcats since transitioning to division one.  The last time, the Mavericks kept the game close in the first half, but the Wildcats were able to run away with the game in the second, winning 84-66.  Both teams have moved on from those teams with few players remaining that actually played in that game.  Some are calling for Weber to be fired at this point while other’s have been pointing out their youth, and the potential of the young guys he has brought in.  The Wildcats recruiting rankings in the last two seasons have been in the top 75.

Kansas State brings back Wesley Iwundu, who is not a character from Star Wars, but is a 6’7″ senior who is the returning leading scorer for the Wildcats averaging 12 points per game last season.  He apparently worked on his shot in the summer and is a more rounded player from when the Mavericks last saw him.  The Wildcats do return just about everything except for two players, and they appear confident that they can easily replace that production even though they lost their leading scorer, Justin Edwards.

Things were not great last season for the Wildcats, who ended at 17-16, but went 5-13 in the Big 12.  They struggled to score the ball, they claim that scoring is not super important to them, which seems obvious as they ended the season as one of the worst three point shooting teams in the NCAA, and ranked 210th in free throw percentage.  Did Doc Sadler take over the body of Bruce Weber?  Did they switch identities like the movie Freaky Friday or Vice Versa?

Hold on, I’m doing this thing lately with all the evil propaganda out there on our presidential candidates, where every time something bad is said that I must say something good…Let me think…Bruce Weber did a really great job at Southern Illinois.  That was tough.  He also went to the NCAA Championship game while coaching at Illinois, cannot forget about that one.

The Wildcats do not care about scoring.  They want to keep the possessions down, and they want to force their opponents to make mistakes while on defense.  I’m just curious: If you’re wanting to minimize possessions, and you have a lack of true point guards on your team, and no one on your team is really an efficient scorer, wouldn’t you want to get the ball out into traffic to get an attempt at an easy basket instead of clogging up the floor and drawing a bunch of fouls for your team to embarrass themselves at the free throw line?  That’s just a thought.

Weber, though, does believe this is maybe one of the most competitive rosters he has had since arriving at Kansas State in 2012, and is encouraged that most of the roster is returning and has had some seasoning together.  The team had a Europe trip this season, so there is a good amount of chemistry on this team.

If the Mavericks can limit their mistakes, which was difficult for them to do last season at many points, and get out and run their style of play, they can really have an advantage to beat the Wildcats.  But, and this is a hard twisting pull of your nipples, this is the Mavericks’ third true road game in four days.  For the Wildcats, it is their second game of the season, and their first game is another home game against…Western…oh, this hurts to say…Western Illinois.  That hurt my face.  Hold on, a nice thing to say…incoming freshman, Jeremiah Usiosefe looks like he could be a really good player for Western Illinois, and it should be fun trying to figure out trying how to pronounce his name.

The Wildcats have not lost a home game to a mid-major team since December of 2014 to Texas Southern, who eventually made the NCAA Tournament that season.  This game is on FSN…and it’s just another Tuesday.